AMBASSADOR PAUL MIHOVA IN ITALY, ROME TO PRESENT HIS CREDENTIALS 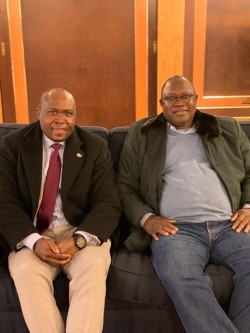 ROME, Wednesday, 2nd December 2020- Zambia’s High Commissioner to the United Kingdom, His Excellency Lt. Gen. Paul Mihova (Rtd) who is also accredited to the Holy See has arrived in Italy, Rome to present his Letters of Credence to The Holy Father, Pope Francis on Friday.

He was received by Mr. Abraham Miti, Charge’ d’ Affaires at the Embassy of the Republic of Zambia in Rome, Italy.

While in Rome, he is expected to have a meeting with the Head of Protocol, Monsignor Joseph Murphy.

He will also meet Substitute of the Secretary of State, His Excellency, Archbishop Edgar Pena Parra.

Ambassador Mihova will also have a meeting with Secretary for Relations with States, His Excellency Archbishop Paul Richard Gallagher.

On Friday, His Excellency Lt. Gen. Paul Mihova (Rtd) will have the Papal Audience, where he will present his Letters of Credence to The Holy Father, Pope Francis.

After presentation, Ambassador Mihova will have a meeting with the Secretary of State, His Eminence Cardinal Pietro Parolin. He is expected back in the United Kingdom on Saturday.